I absolutely love innovation … so when I read in the news today about how hard it is to catch the SpaceX rocket fairing with a net that is installed above a moving ship, and seeing that the failure to catch that nose-cone has happened before, I asked myself … what crazy (but theoretically feasible) solution could be explored in that scenario that no one has talked about yet.

TLDR: Here’s my unsolicited idea:  A custom-built drone that can nudge the fairing in the right direction. It might be a creative and economical solution for the problem.

Here’s the problem described by the news outlets: The parachute carrying SpaceX’s rocket fairing constantly misses the ship (aka Mr. Steven), which was designed to catch it with a big net.

From my perspective, given that it’s hard to dynamically and quickly re-position the ship, a possible solution is to try to re-position the approaching fairing itself, but how?

My idea for a creative and economical solution: Use a custom drone that can be launched from Mr. Stevens (aka, the ship) and can gain enough altitude and momentum to help drive the parachute direction by nudging/pushing the cables. With enough altitude, any tiny nudge should be enough to make a difference in direction and positioning, and if the drone stay with the fairing until the very final landing alignment, it can continuously try to realign the parachute with the net, helping account for any unknown unknowns that are hard to feed into a prediction model.

Here’s the gist of my idea: 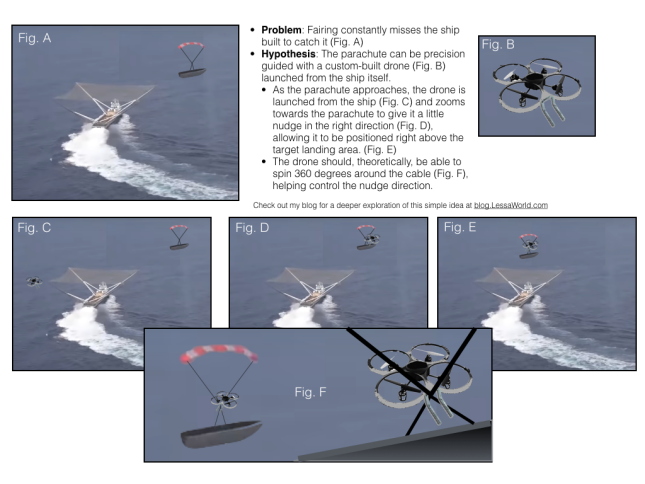 Disclaimer: I’m neither a rocket scientist nor a physicist and this is just an unsolicited idea that seems to work well on paper and was fully baked in less than 2 hours (including the writing of this post!),  so running a few simulations to ensure a successful outcome would be an interesting next step.  So, if anyone reading this ever happen to create a simulation to test this out or simply work out all the math, I’d be *VERY* curious to hear from you to satisfy my curiosity.   😀

If you like this type of creativity, you should check out my 2016 post with another crazy idea related to this subject.

Disclaimer II: I have absolutely ZERO affiliation whatsoever with SpaceX.