For the past year or so, while seeing all the news coverage related to commercial companies going after the much sought-after recycling of space rockets, I asked myself, what could be done in a relatively short amount of time to improve the reliability of this fairly new vertical landing strategy? What could allow rocket companies to save tens of millions of dollars instead of facing failed landing attempts? So I started thinking about ideas that could improve success perception, and allow rocket companies to try to rescue rockets that misbehave during the last few seconds of their vertical landings. As a result of all this unsolicited thinking, I came up with an idea, which might not be 100% feasible, but hey, creativity and the will to innovate are everything!

The current state of things:

Bringing any rocket to a perfect precision vertical landing is a (huge) challenge. Rocket engineers have already created rockets that have an elaborated landing system that includes  capabilities like timed burns for deceleration, independent grid fins, and deployable landing legs, all to provide additional aerodynamic stability that is capable of supporting the forces of landing and the mass of nearly empty rocket stages.

As a naive outsider watching the landings, what I noticed is that during most unsuccessful landings, the overall operation seems to fail usually right after rockets reach the targeted landing area, as they reduce the engine thrust for the touch down.  A common problem I observed while watching the available failed landing videos was that as certain rockets started tilting during the last few seconds of landing, their center of mass get affected and reach a point where nothing else can be done to help balance them. In those cases, given a rocket’s lack of powerful thrusters (above their center of gravity) to quickly counter balance any excessive uncontrolled tilting, things will inevitably start to literally go sideways.  A good analogy uses a broomstick as a reference. Try to balance a broomstick using the palm of your hand, and move your hand to the ground level until your hand movements come to a full stop, all while keeping the broomstick upright.  The broomstick task would certainly become less difficult if one could use their other hand to briefly nudge the top of the broomstick, here and there, as needed, gently helping balance the broomstick, bringing it to a restful state.

I’m not going to talk about tweaking the rockets.  Companies in that industry already have 1000s of rocket scientists working on that front. What I’d like to propose is focusing on a landing assistance apparatus that could be quickly activated and deployed at the planned landing site. Essentially, a plan B. Here’s the thing: Any reusable rocket with their broomstick-like rocket design could, at least in theory, have a fallback plan relying on that same broomstick-nudging strategy to help stabilize the rocket’s landing angle and bring it to a steady vertical alignment.

How would this work?

At its core, the idea is to create an autonomous system and apparatus capable of : 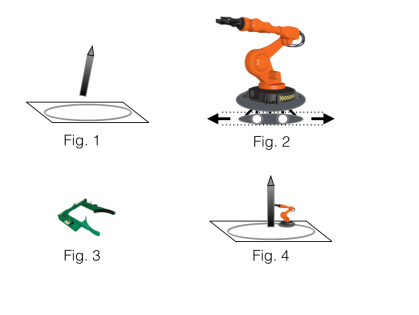 Such fast and automated guiding track could, in theory, be mounted underground to minimize the footprint of the apparatus and any applicable air-drag resistance. The time between detecting a problem and start delivering the assistance is in the order of seconds. Apparently, based on observations, 5-10 seconds at the most, so I believe that the custom vehicle operating on such track would require both a body with a low drag coefficient rate and high-torque engines working in parallel, something with a powerful acceleration to be able to quickly position the apparatus at the right location around the rocket. The large hydraulic/pneumatic gripper would also require a special setup to allow the rocket to touch it while generating the least amount of friction/heat as possible. A possible solution would be to equip the gripper with powerful magnets that would react to a magnetized rocket surface with opposite forces, but that would require changing the design of the rocket, so maybe a simpler solution is to equip the gripper hand with several wheel-like points that would gently spin as the rocket slide its way down the grip. It’s important to highlight that there’s no grabbing of rockets here. The goal is to simply provide a surface that can be used to lightly nudge the top of the rocket, just like it can be done with a broomstick.

Back to the design aspects, low footprint of the overall apparatus is a key requirement as this system cannot have a tall structure as those can prevent rockets from reaching their target landing areas.  Another design consideration is that since the gripper would neither need to support the full weight of the rocket,  nor have a need to grip its whole circumference, this apparatus wouldn’t necessarily need to be a very rugged system. It would only need to be nimble enough to quickly position itself and provide a supporting surface for the landing rocket to touch and start a pivoting operation, auto-correcting its landing angle, and eventually, vertically realigning itself.

I’m a computer scientist and a thinker, not a rocket scientist, not a mechanical engineer. I do enjoy trying to solve hard challenges that I find intriguing though. I’m a big fan of innovation and I think that what I have described above is a very cool and innovative solution to increase the success rate in the process of landing reusable rockets.

If not completely practical, I hope this idea is at least inspiring to the scientists and engineers out there in such exciting industry.